sidebar_content
Skip to Main Navigation Skip to Content
"Pink Drink" or not, this cocktail was the choice of the powerful men who ran the various Philadelphia industries.
13 January,2021By Christopher Buecheler
This post may contain affiliate links, read about our editorial promise

Here we have an old-time, pre-Prohibition classic! The Clover Club is named not after my favorite bar in Brooklyn, but after a men’s club based in Philadelphia that met at the famed Bellevue-Stratford Hotel (which is now a Hyatt, but still in the same building). Reports place the genesis of this club as early as 1882, but the most definitive source says it formed in 1896. The drink itself first appears in cocktail books from 1917, but is probably several years older than that.

“Pink Drink” or not, this cocktail was the choice of the powerful men who ran the various Philadelphia industries. The Clover Club would gather to discuss business of the day and share a cocktail before, one assumes, heading home to their fabulous mansions for dinners of goose and caviar. Or cheesesteaks, perhaps. This is Philadelphia, after all.

The drink is a simple combination of gin, raspberry syrup (often augmented with simple syrup to keep the sourness in check), and lemon juice. Egg white is used to give the cocktail a silky mouthfeel and a big, foamy head. As I’ve mentioned before, eggs are much safer than their reputation and you probably shouldn’t worry about them, but if it’s a concern, you can buy pasteurized egg whites in just about any grocery store.

I like to use organic raspberry syrup (which you can also get in most grocery stores), preferably with actual bits of berries floating in it. I find it has a more legitimate raspberry flavor while still adding a little bit of the same sort of “preserved” twang you get from Rose’s Lime Cordial, which I like in this drink. In a pinch you can use muddled raspberries or even pomegranate grenadine, but I think raspberry syrup works best.

This recipe uses the classic proportions, which are pretty light — makes sense for a pre-dinner drink. Me, I like to take the gin up to two ounces. 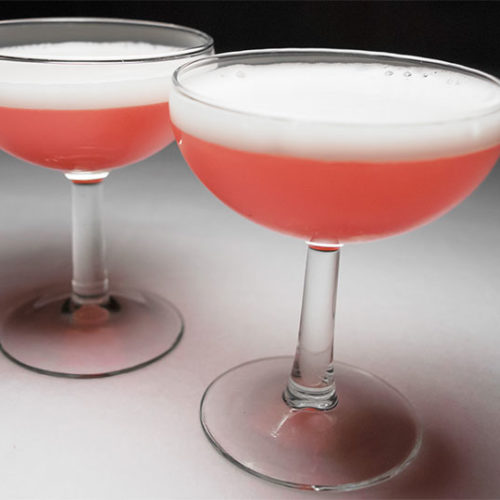 Cocktails & AlcoholIt’s Friday…Have a Drink
Bring your body and mind back into a relaxed state.
There’s no time like the present to check some names off your gift list.
Your kids need you; your phone doesn’t.
Did You Miss These?
Your next favorite pair of jeans.
Simplify your life and have better style.
As it turns out, philosophy is a lot more useful when you’re out in the real world rather than in a classroom.
The last hurrah of the Black Friday sales weekend.
Black Friday is here. And we've put in some serious time distilling what's worth shopping and what's worth skipping.
Save on gifts and stock up on essentials.
Cigars are best enjoyed socially - here’s our crash course on how to build the best experience.
Coming up with gift ideas that are reasonably priced can be a chore. These 100 gifts will make any man happy as a kid, and most are quite affordable.
Yes, the holidays are all about giving to others – but that doesn't mean you can't benefit from the deals too.