sidebar_content
Skip to Main Navigation Skip to Content
Many post-college guys just aren't in the market for a brand-new car. That's why the Everyman Test Drive also puts smart, pre-owned choices to the test.
27 July,2020By Adam Brewton / Photos By Adam Brewton
This post may contain affiliate links, read about our editorial promise

As I begin to enter the 2nd year of my 30’s, and my wife and I are in the beginning stages of starting our family, I find myself staring at my Jeep and wondering if it isn’t time for me to start looking into a more sensible form of transportation. A minivan is out of the question and, if I’m going to take on new payments, I want better gas mileage so an SUV is out too.  That leaves only the sedan.  And what better representation of our day and age than a Toyota Camry Hybrid? The 2013 Camry Hybrid XLE to be specific. Why a 2013? Well, we’re starting a family and cannot afford a brand spankin’ new car. A well maintained, slightly used model with about 25k miles can be found for about $27k. For our test, we rounded up a specimen that is currently owned by a family with two kids, did no cleanup as not to spoil the “lived in” feel, and made an 800 mile round trip journey that consisted of suburban neighborhoods, long stretches of Interstate, and heavy city traffic in Atlanta. 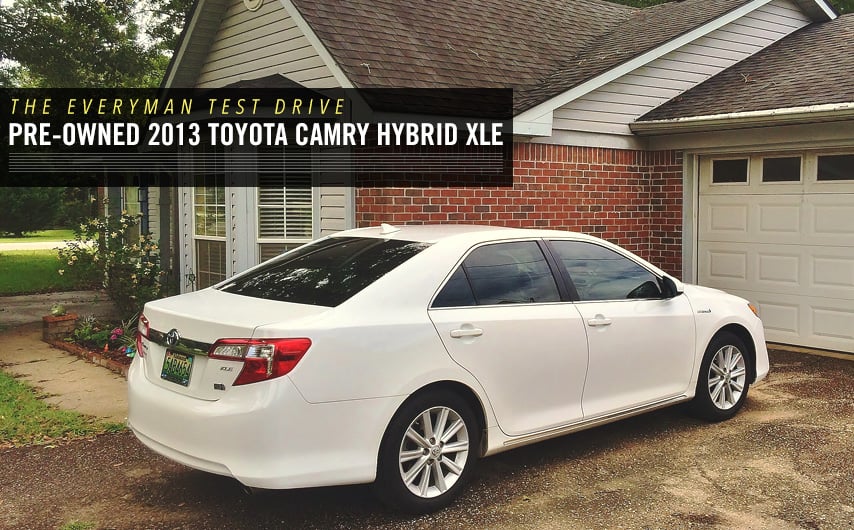 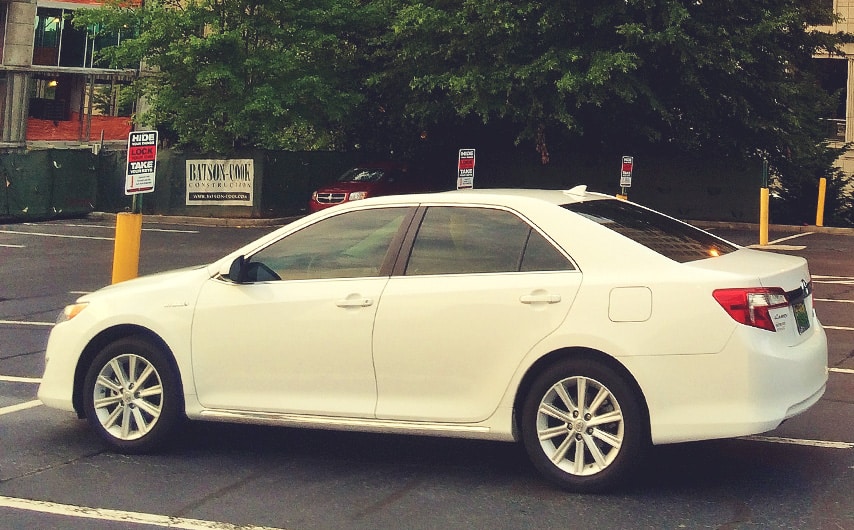 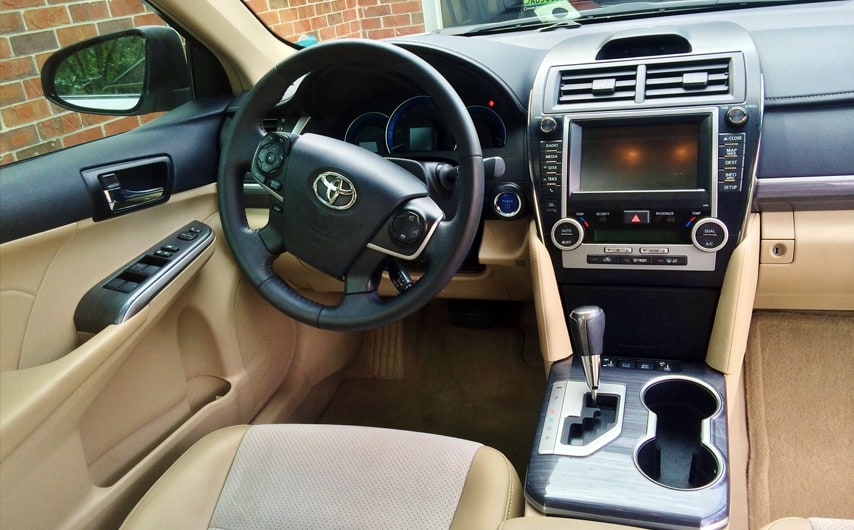 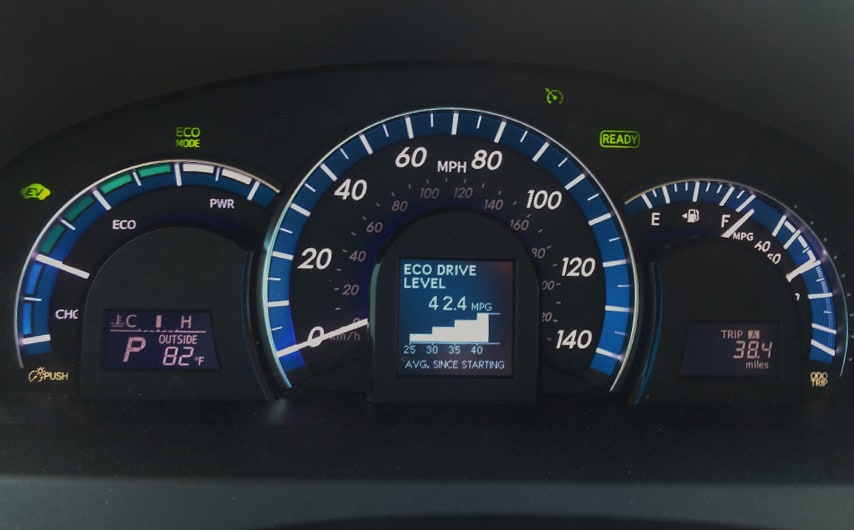 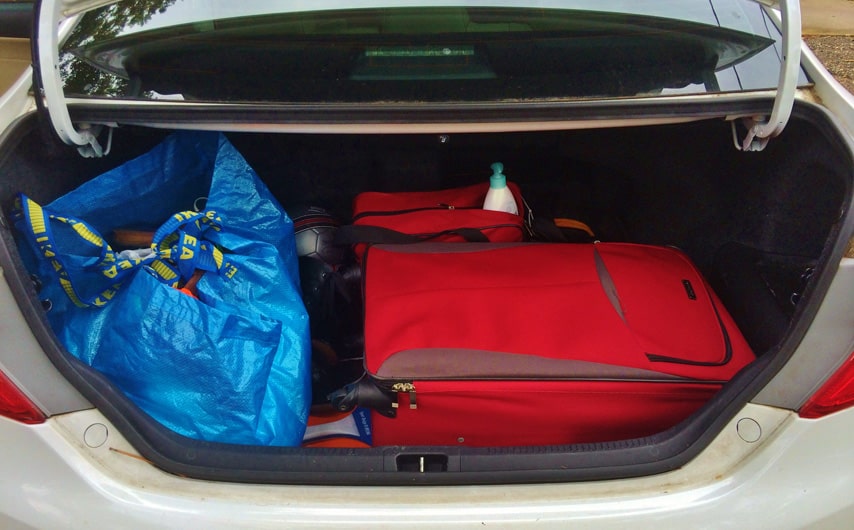 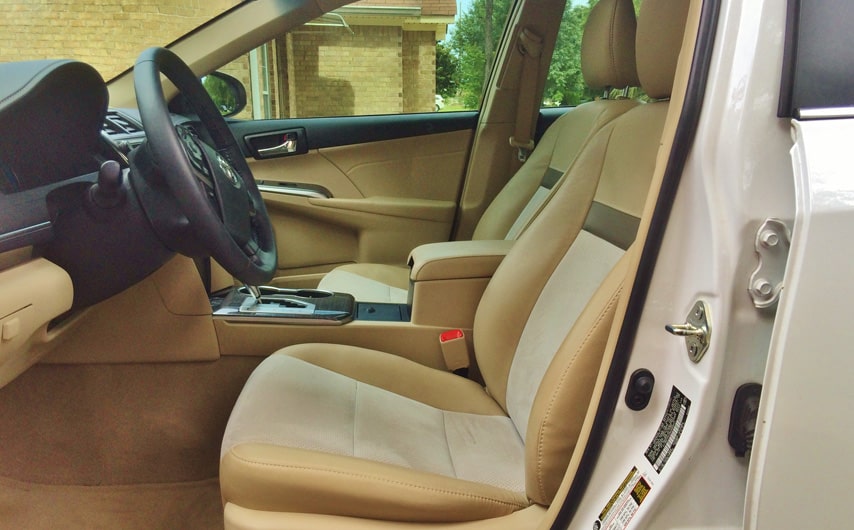 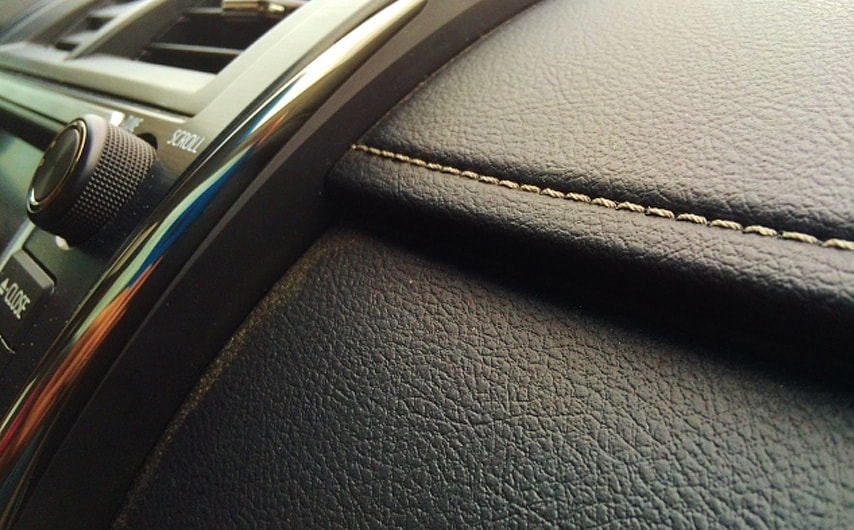 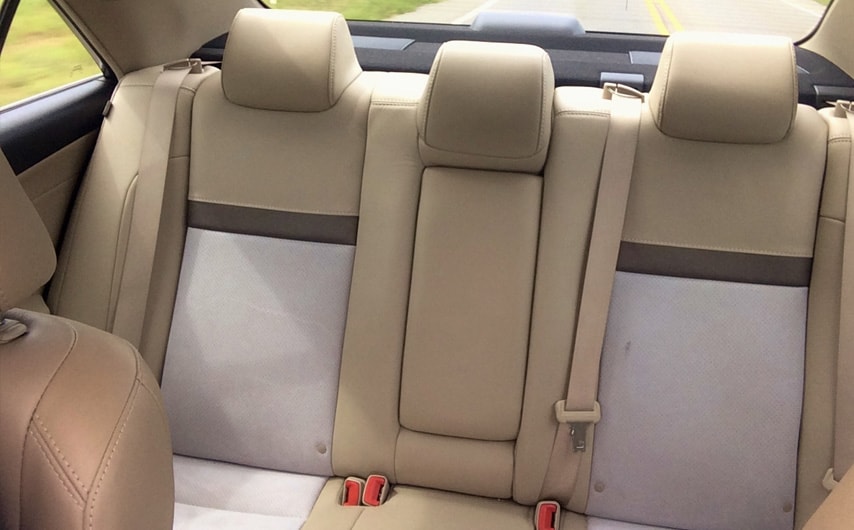 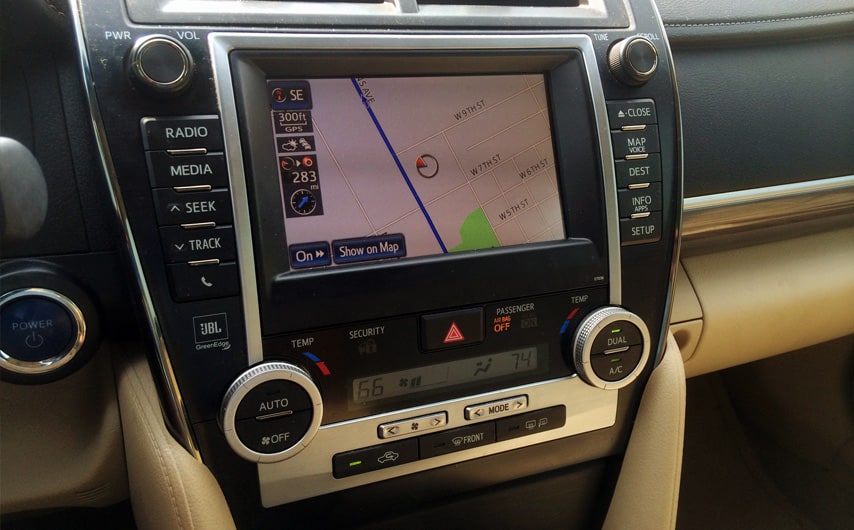 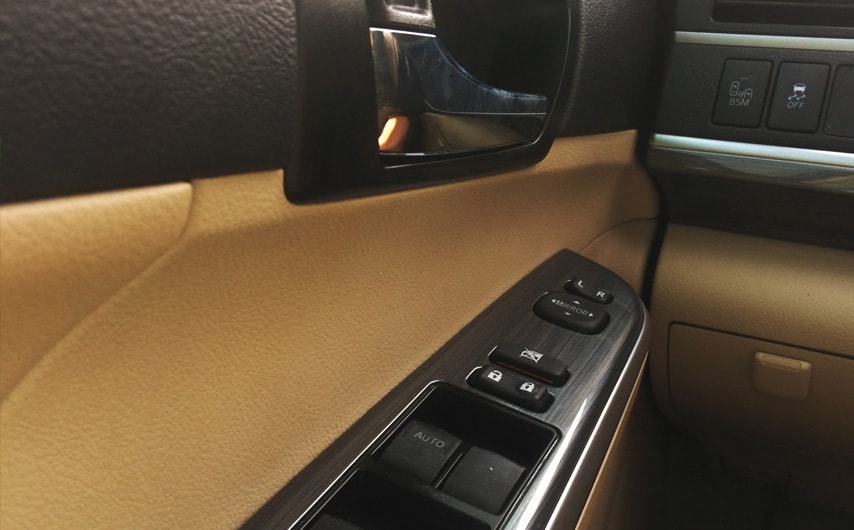 The Camry’s hybrid system consists of a 2.5L four cylinder engine coupled with an electric motor.  Both of which drive the front wheels through a Continuously Variable Transmission (CVT).  The engine combination makes 200 horsepower, and the EPA says it gets 41 MPG in the city and 39 MPG on the highway.  While the horsepower numbers aren’t stellar by any means, the electric motor delivers all of its torque right at the start so the Camry is still able to get up and go.  Merging on the Interstate and overtaking slowpokes is easy. Switching between the gas and electric motor is automatic, but the car can be instructed to drive on just the electric motor (EV mode) too.  That seems handy if you run out of gas, but is otherwise useless in normal situations.

The braking system on the Camry Hybrid recharges the battery, and operates with a combination of the electric motor and traditional brakes.  They take a little getting used to, and sometimes they bite harder than expected when the hydraulic brakes kick in.  They aren’t unsafe, but they do feel different than traditional brakes.  They also make a cool futuristic hover-car type sound when coming to a stop.

The ride is smooth and well planted. Bumps are absorbed really well for a family car too. The electronic steering helps the car go where you point it, and there were no unnerving moments even during high speed lane changes or emergency maneuvers.  It’s no sports car, but it does handle much better than expected from a Camry.

The interior of the Camry is very nice, but very unassuming, and the leather seats are comfortable, but not luxurious. After six hours of driving we arrived tired, but not sore, and we had no reservations about hopping right back in for the commute to dinner an hour later. The middle section of the seats is a suede-type material.  The material itself is nice to the touch, but our test model already had some smudges that wouldn’t come out.  Also, as my wife discovered, small bits of cracker or chips can get stuck in the material and you won’t find them until you sit down while wearing ladies shorts and they become lodged in the back of your thigh.  Protected by my “I’m having a kid but want to feel young” cargo shorts, I had no issue with this. There is ample room in the back seat for adults, and the rear air conditioning works very well.  The trunk is also big enough for plenty of luggage and all of that other stuff parents end up hauling around all of the time.

The dash is mostly plastic, but doesn’t rattle or feel cheap. The white stitching on the black dashboard gives it an upscale feel, but the faux stitching that is just molded into the lower part of the center stack causes that feeling to subside a bit. Where the interior really shines is sound deadening. The cabin is so quiet that, even at above Interstate speeds, my wife and I were able to carry on a conversation by whispering. This means we could talk about our imaginary kids in the back seat without waking them.

Our test Camry came equipped with every bell and whistle Toyota has to offer. Honestly, this is about five bells and three whistles too many.  The Bluetooth system syncs quickly with our iPhones, and the backup camera is a handy feature, but outside of that you don’t need any of the other goodies.  The navigation system is about as good as getting directions from a friend on the phone, and several times only got us within about 50 yards of our actual destination. The blind spot monitoring (BSM) system is kind of nifty. But really, shouldn’t you just look over your shoulder before you change lanes?  Plus, our tester needed to get checked by the dealership after our trip because it started having issues with the BSM not registering nearby vehicles.  So I just looked over my shoulder.

The Camry’s sound system is decent, but it definitely seems to have been designed by a focus group consisting of listeners of very specific styles of music. It played our Bob Segar, Johnny Cash, Hootie & the Blowfish, and 311 exquisitely, but struggled with Ginuwine, Blackstreet, and Cypress Hill. Through the integrated touch screen, there are thirteen different ways to monitor functions of the car, and seven different map configurations, but no “thumbs up” for Pandora streaming, and no preset equalizers.  Little things sure, but this is not a cheap car, and my $120 aftermarket stereo has both of those features.

There’s just something about knowing you’re in a hybrid that compels you to drive more efficiently. I found myself sticking to 70mph on the interstate because that delivered better mileage than going 75 or 80. When accelerating from a stop, I did so gently, so as not to flood the engine with gasoline it would just waste. I became, as my wife described it, a responsible and boring old man.  Driving like an old age person did provide us 41.9 MPG for our overall trip according to the onboard computer.  Or did it? According to my gas pump math, I came up with 38.6 MPG.  Still excellent for a sedan, but dropping out of the 40s is a big hit psychologically for me. Mentally, high 30s is very different than low 40s.

The only other negatives to the entire car are the previously mentioned issues with the widgets.  They are distracting when trying to get used to the vehicle.  Even then, they are just silly things you don’t really need.

Overall, the Toyota Camry Hybrid is a nice car. Not in the way a Lexus is a nice car.  More in the way that Eddie Bauer khakis are nice pants.  They’re well made, will last a long time, and look good without calling attention to themselves. However, you don’t get excited about khakis.  You accept that you need them, so you get the ones that fit the best, look nice, and don’t break the bank.

CarsEveryman Test Drive
Getting the perfect fit right off the rack is like winning the lottery. Whether you wear suits or selvedge denim, this guide demystifies the process of tailoring and alterations.
Discipline is a skill anyone can learn.
Cutting through the confusion: A breakdown of common knife terminology.
Did You Miss These?
Discipline is the key to all hard things – but it is so much more than just "forcing yourself to do things you don't feel like."
To celebrate the 40th anniversary of the release of Jaws, we honor the timeless costume design with 4 inspired sharp and affordable outfits.
Graduation is an exciting time – it also signals the end of every life structure you've ever known.
You don't have to be a traumatized father fighting a fungi-based zombie apocalypse to wear this jacket.
We've researched the best men's winter coats, based on material composition, product rating, and price.
Life can be overwhelming - Here's a proven method used by fighter pilots to make smart decisions fast and stay on top of it all.
And how to build them in under 30 days.
Do these now to keep your style strong and simple.
If you want to know how some rich actor gets in amazing shape, you're in the wrong place.