Be the Man in the Arena: How to Finally Light the Fire That Will Free Yourself from Criticism & Failure

As comfortable as the sidelines are, it’s no place for the modern man to be.

April 23rd. In the chambers of a regal old university in the Latin Quarter of Paris, former-president Theodore Roosevelt speaks to an enraptured crowd. Despite the Old-World majesty of the venue, the subject of the lecture is distinctly furiously modern, outlining what it means to be a participant in a strange experiment called “democracy.”

While his “Citizenship in a Republic” address touched on everything from labor to leisure, inequality to innovation, one section of his nearly 9,000-word speech was so powerful and profound as to stand out above all else. Two simple sentences explaining why all of us need to aspire to be the “man in the arena.”

Man in the Arena

“It is not the critic who counts; not the man who points out how the strong man stumbles, or where the doer of deeds could have done them better.

The credit belongs to the man who is actually in the arena, whose face is marred by dust and sweat and blood; who strives valiantly; who errs, who comes short again and again, because there is no effort without error and shortcoming; but who does actually strive to do the deeds; who knows great enthusiasms, the great devotions; who spends himself in a worthy cause; who at the best knows in the end the triumph of high achievement, and who at the worst, if he fails, at least fails while daring greatly, so that his place shall never be with those cold and timid souls who neither know victory nor defeat.”

Listen to the quote, read by President John F. Kennedy in 1961:

Those words are as true today as they were over a century ago, echoed across time by politicians and poets, athletes and academics alike. And for those of us enduring this particular moment, they’re perhaps especially meaningful. After all…

Our generation is no stranger to criticism. While every generation has had to suffer through wails and warnings about “kids these days,” for us it’s been particularly inescapable. We’ve had it rained on us from cable news, bled through in editorials, satirized on SNL, eviscerated in self-proclaimed “thought” pieces, and shouted at us by anonymous commenters on the internet. If the critics are to be believed, we’re simultaneously a bunch of soft, sniveling PC snowflakes incapable of functioning in the adult world and a pack of violent, cannibalistic, anarchists who pick our teeth with the bones of our enemies. As impressive of a feat as that is, the sheer ridiculousness still doesn’t take the sting out of it.

Listen long enough and we will start to get ground down by the constant barrage of belittlement, scorn, and scrutiny over our every action – whether it’s the job we’re working, the art we're creating, the candidate we’re campaigning for, the partner we’re pursuing, or even how we spend our free time. And while we can do our best to resist it, even the most mindful of us are at risk of internalizing that self-censure, casting doubt on our every plan or dismissing every result. It’s at times like these that Roosevelt’s reminder is especially important: the critic doesn’t count.

Roosevelt doesn’t tell us that the people dissecting our efforts are cruel or cowardly (though they sometimes are). He doesn’t tell us that they’re wrong (they often aren’t). What he does tell us is that it ultimately doesn’t even factor into things. It’s not just that the game looks different from the field than from the bleachers, it’s that without someone sweating and striving, there wouldn’t be any game at all.

Criticism – constructive or destructive, sabotaging or sincere – will by its very nature always come second. The minute we start to frame our efforts around that truth is the minute we start liberating ourselves. The here-and-now is what counts because the here-and-now is all there is. That attitude allows us to focus on our efforts, not people’s potential reactions to them. It lets us grapple with the situation as it confronts us, not from the perspective of people up in the nosebleeds.

Yes, the haters are going to hate – there’s no way around it. But the haters aren’t going to exist without us first doing something to piss them off, so why not do so on our own terms? 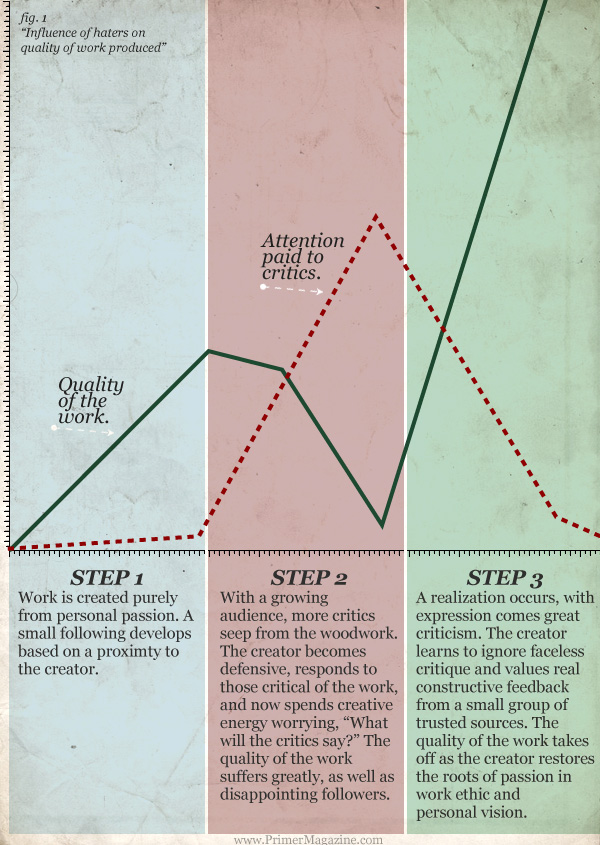 Read: The Rise of Critics in Every Creative Journey

Pain is the Process

Though Roosevelt calls on us to have the courage to start, he doesn’t waste any time warning us that every endeavor comes with a cost. We’re used to hearing that there’s no victory without struggle but what “Man in the Arena” tells us is that there’s no attempt without a struggle. Success is not guaranteed – sacrifice is.

Strange as it might sound, it’s still something worth striving for.

Frequently, we treat adversity as a sign that we’re doing something wrong when, in reality, it’s often the clearest sign that we’re doing something right. It means we’re pushing ourselves beyond the limits of our current skillset. We’re venturing into the wilderness beyond the borders of our comfort zones. We’re consciously and deliberately placing ourselves in situations where our character and values are actually being tested (which is the only time we’ll ever know if they really hold true). Simply stated: if we step into the ring and don’t find ourselves challenged (and knocked on our asses), we’re in the wrong weight class.

At the same time that we’re putting criticism (real or imagined) out of our heads, we should be replacing it with the expectation of adversity. When it comes, we’re not going to be caught off-guard or broken by it. We’re given the desperately-needed chance to toughen ourselves in advance. Yes, the hurt will still be there, but it will be all the more bearable with the knowledge that pain isn’t pointless. It will pass more quickly as we acknowledge that it means we’re challenging ourselves. When the dust settles, it will leave us not only standing but even stronger than before – ready to struggle again. 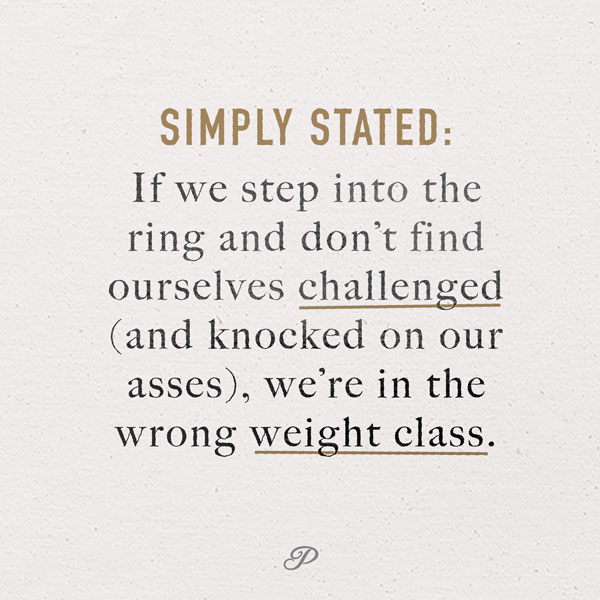 That’s the final challenge we’re left with by “Man in the Arena.” Not to strive over and over because our persistence will pay-off eventually, but because the act of straining and fighting is all it really takes. 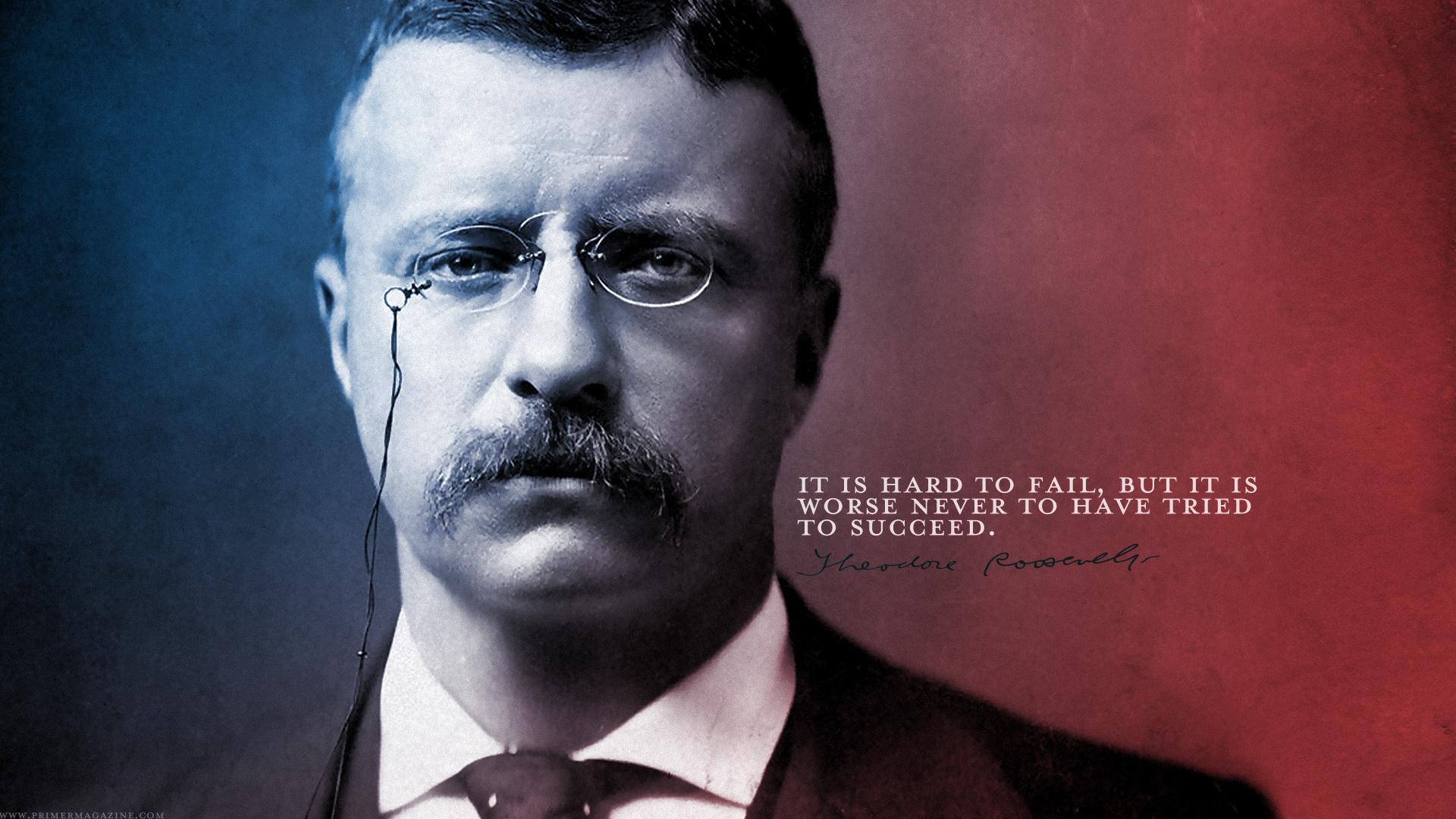 As much as we’re told that winners write the history books, it’s the losers who often earn the world’s admiration. We can name the leaders of botched revolutions and uprisings. We can trace the trails left by explorers who never found what they were searching for. We can cite the men and women whose best endeavors turned into absolute catastrophes. Failed bobsled teams and botched moon missions, lost Antarctic voyages and last-stands against oppression.

Despite their defeats, we celebrate these people as heroes. Why?
Because they were there.

Once more, that message is particularly powerful at this exact moment in history. It’s not that the projects ahead of us are uniquely brutal (we’re probably not canoeing down a malarial tributary or facing off with a literal warrior in a coliseum) – it’s that the sidelines have never been more comfortable.  At no point in history have there been more distractions, diversions, and justifications to keep us from the challenges we could be facing.

“Showing up,” asserts lecturer and academic Brene Brown, is the heart and soul of Roosevelt’s speech. Whether it’s a creative project, a new job, or even the lifelong battle for a healthier body, it’s the ambition, commitment, and courage to actually try that distinguishes us. How do you tell the athletes from the spectators? Not by who’s sporting the team colors. Not by who’s roaring the loudest. Not by who’s the strongest person there or even the most experienced or the person with zero points. It’s who’s actually on the field, in the dust and the sweat and blood, instead of up in the bleachers. 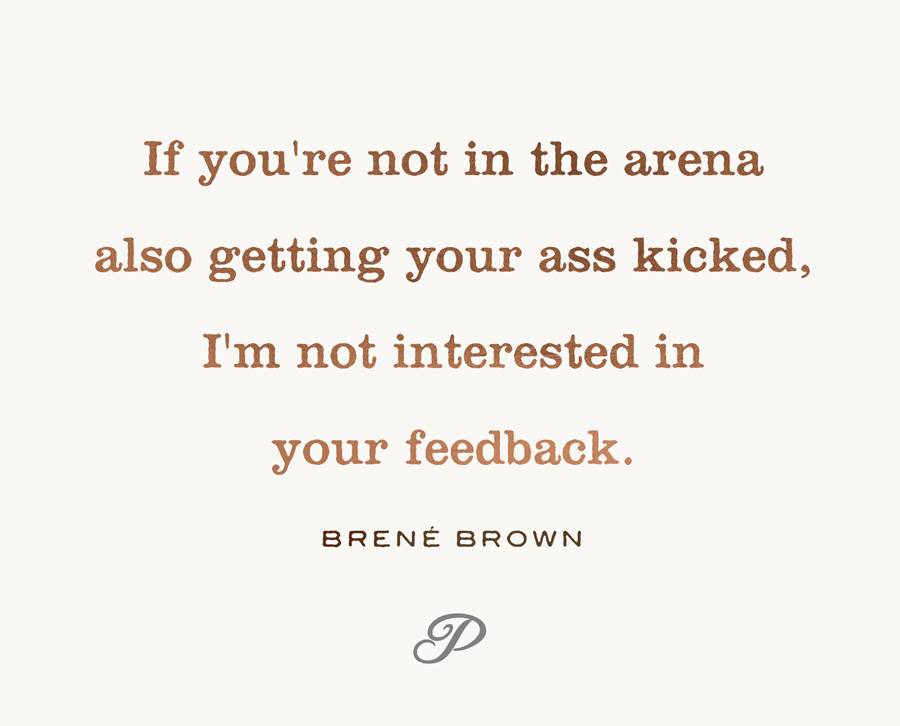 Stepping into the arena. Being there.

What speeches and sayings have inspired you to keep going in the face of adversity? Keep the conversation going in the comments!

PrinciplesSelf-DevelopmentThe Best Life
An upgrade opportunity.
Some of your staples may be acting as double agents.
Looking for style that is simple, clean, and put-together? Look no further than the Scandinavians.
Did You Miss These?
Our week-long series of film inspired looks that you can can actually wear.
Few life events can cause as much upheaval and pain as a relationship ending with someone you cared about. Whether you’re the breaker or the breakee, odds are you will feel a range of emotions for ... [more]
Finally! Here is a woman to set us straight on what we're doing wrong when we talk to them. A guest post from communication coach Katrina Razavi.
Masculine culture pushes the need to suppress or overcome emotions – the most powerful tools a man has.
A rugged style with refined elements makes this a comfortable casual outfit for the rest of winter.
A jacket has two functions: Keep you warm, of course, and define the rest of your outfit.
Nothing is more deadening than grinding gears on a life without purpose.
Getting back to the body you want begins between your ears.
The turtleneck has a long history with both rugged and refined men – so why don't more of us wear them? We'll show you how to nail it effortlessly.