sidebar_content
Skip to Main Navigation Skip to Content
You’ve watched everything on your list and you need something new to dive into. We've got you covered.
3 April,2020By Justin Brown
This post may contain affiliate links, read about our editorial promise

Tiger King: Check. Caught up on Westworld: Yep. Let’s be honest: You’ve already binged everything on your “want to watch” list and now you need something else to stream. But you just can’t decide on anything new! We’re here to help. There are plenty of excellent original shows streaming right now, each of which captures a compelling flavor of all the shows you’ve loved before while also giving you a brand new rabbit hole to fall down.

Where to stream it: Amazon Prime

Here’s the setup: a career pencil pusher at the United Nations discovers that there is actually a second, parallel Earth and a portal to it, right under his office. And though the two planets started off as identical in the 1980s, they are now very different and let’s just say, there is some friction between the two populations. Basically, this is a tense sci-fi TV show about a thrilling Cold War between two different Earths in alternate dimensions. Plus it stars JK Simmons. How are we all not watching this already?

Binge bit: everyone should be aware that a non-spoilery piece of plot information which distinguishes the two earths involves a deadly worldwide pandemic having decimated the alternate Earth in 1996. So if you’re trying to avoid the current news by streaming something fictional and virus-free, this may not be the best choice at the moment.

Like any self-respecting animated show centered around kids going through puberty, Big Mouth is juvenile, gross, and awkward. But it’s also smart, clever, thoughtful, and unexpectedly empathetic while being incredibly funny — not an easy combination to achieve.

Binge bit: The show was recently renewed for a fourth, fifth, and sixth season so once you burn through the first three years, you can join the rest of us in eagerly anticipating heaps more of history’s greatest animated show about adolescence.

Chronicling the birth of behavioral analysis and criminal profiling at the FBI in the 1970s, Mindhunter distinguishes itself from similarly themed shows like Dexter or Criminal Minds by using stories based in reality and slowing down the familiar police procedural to focus not on bloody carnage but on the men and women exploring the then-burgeoning cerebral aspect behind law enforcement. You will be creeped out but also desperate to see what happens next.

Binge bit: With a majority of the show’s episodes directed by David Fincher, Mindhunter feels less like a Netflix series and more like a series of spinoff movies based on award-winning films like Se7en, Gone Girl, and Zodiac (all directed by Fincher).

Where to stream it: HBO

After beginning life as a web series based on the simple premise of “a nameless man sells weed to a new customer each episode,” High Maintenance has now become an HBO staple that is more an anthology of thoughtful, interesting short films than a standard TV show. Delivering new, well-crafted, succinct character portraits every week, the show provides endlessly positive, funny, compassionate, and interesting energy which makes it perfect for both bingeing and sporadic viewing.

Binge bit: High Maintenance started as a self-produced web series in 2013 but the following year, it became the first-ever show to receive funding from Vimeo as original programming.

Where to stream it: HBO

Based on the 2018 Stephen King novel of the same name, The Outsider starts off as a well-executed murder mystery but slowly reveals itself to be a mythical tale dripping with classic King supernatural spookiness. If you’ve been looking for something that combines the ominous crime drama vibes of the first season of True Detective with the chilling moodiness of the 2017 film version of the King’s classic It, definitely give The Outsider a watch.

Binge bit: Jason Bateman plays one of the lead characters (Terry) and also directed the first two episodes, something he previously did on both Ozark and Arrested Development (two more excellent shows which you should binge right now, if you haven’t already).

Where to stream it: Disney+

If you’ve ever been interested in the design, engineering, and logistics of the Disney theme parks (all the way from the original Disneyland up to and including things like the new Star Wars: Galaxy’s Edge), this is the perfect choice for you. Hypnotizing in its educational detail and full of eclectic and eccentric personalities, The Imagineering Story combines remarkable archival footage, intellectually engaging interviews, and soothing narration from Angela Bassett to deep-dive into the attractions and imagination which have helped create (some of) “the happiest places on Earth”.

Binge bit: The series is directed by acclaimed documentarian Leslie Iwerks, who is a third generation “Disney brat” — her father was legendary camera technician Don Iwerks and her grandfather was Ub Iwerks, animator and co-creator of Mickey Mouse.

If you have been searching for something to fill the hole left in your heart by landmark mysterious sci-fi series like Twin Peaks and Stranger Things, look no further. Also, do you like time travel? Because Dark is a bizarre, tense, existential, and fascinating family saga based around time travel. And yes, it can get dark.

Binge bit: This was the first German-language Netflix original series so, be ready for elegant subtitles. You can watch it with an English dub, but the subtitles are less distracting in our opinion.

Where to stream it: Hulu

Whether or not you are a fan of the original Nick Hornby novel and the cult film starring John Cusack (and Jack Black in his breakthrough role), 2020’s High Fidelity is a worthy successor to both. Blending a love for music and romantic comedies with modern sensibilities, this new Zoe Kravitz-led series is charming, artistic, emotional, and legitimately funny for the entirety of the season. Plus, the music alone is reason enough to stream all ten episodes right now.

Binge bit: Zoe Kravitz’s mother, Lisa Bonet, played musician Marie DeSalle in the 2000 film and in honor of that character, one of the preferred hangout spots for the characters in the Hulu series is named “DeSalle’s”.

Where to stream it: Disney+

The new Ducktales is everything you would want in the rebooted version of a beloved animated show from your childhood. It's absolutely funny (for both adults and kids), engaging, energetic, has a distinct visual style, and boasts a voice cast that is unimpeachably awesome (just as a sample: Scrooge McDuck is played by Doctor Who himself, David Tenant).

Binge bit: The original Ducktales is also on Disney+ in full, if you ever want to jump back into one of the cornerstones of your childhood’s weekday afternoon cartoon lineup.

Where to stream it: Hulu

[Categorize this one as an “underappreciated classic”, as it has been off the air since 2013.]

If you’ve always wanted to get into Friends but found it too dated or not quite funny enough or overwhelming in its scope (236 episodes is a lot, no matter who you are), you’re in luck — Happy Endings is here. A show which was cancelled too early, Happy Endings slipped through the cracks because it was never quite as generic as How I Met Your Mother, never quite as conceptual as Community, and never quite as quirky as New Girl. But it is as funny as any show from this century and represents one of the few modern ensemble sitcoms where every performer has lethal comic timing and no character is dead weight. To put it simply: the jokes are relentless and the friend group actually seem to genuinely like and care about each other — why didn’t we get 236 episodes of this?

Binge bit: The Russo Brothers (also known as, “the guys who directed the two best Captain America movies and the two best Avengers movies”) served as executive producers on the series, and directed multiple episodes.

Looking for the best movies to stream?

We’ve all seen Star Wars, Fight Club, and The Godfather but, whether we’d like to admit it or not, everyone has some gaps in their film knowledge. So, rather than spending a bunch of money on a film education & theory course, we’ve compiled a list of ten legendary movies which you can stream right now, to hopefully bolster your grasp on what makes a classic film. 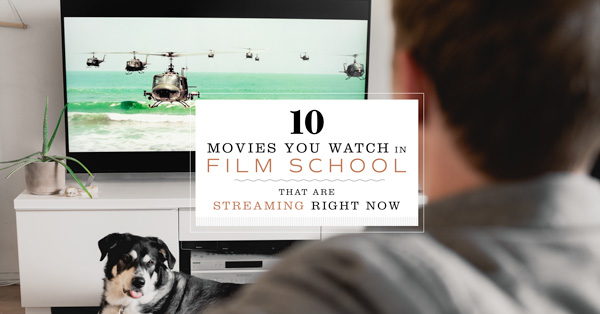 Television
Lighten up your winter wardrobe.
Getting the perfect fit right off the rack is like winning the lottery. Whether you wear suits or selvedge denim, this guide demystifies the process of tailoring and alterations.
Discipline is a skill anyone can learn.
Did You Miss These?
"Aged liked a fine wine," is a popular adage, but not all wine gets better with age, and the best wines aren't all old. No need to be embarrassed when you're drinking that fine bottle of 2009 vino, we... [more]
The proven trick for staying on track.
After reading through this guide, you should have a working knowledge of the different types of wine and enough vocabulary to set out and buy your first serious bottle. (And maybe impress your ... [more]
Cutting through the confusion: A breakdown of common knife terminology.
You don't have to be a traumatized father fighting a fungi-based zombie apocalypse to wear this jacket.
We've researched the best men's winter coats, based on material composition, product rating, and price.
Life can be overwhelming - Here's a proven method used by fighter pilots to make smart decisions fast and stay on top of it all.
And how to build them in under 30 days.
Do these now to keep your style strong and simple.