Some cars are pretty to look at. And some cars scream to be driven. I was excited to be offered the opportunity to get a VIP first-look at Cadillac’s brand new ATS-V lineup at Milk Studios in Los Angeles.

The president of Cadillac himself, Johan de Nysschen, introduced and unveiled the completely new V-series lineup, describing it as “sex on wheels.” If you’re unfamiliar with the V-series offering, it’s the brand’s high-performance addition to their luxury vehicle portfolio, in the same vein as Audi’s RS, BMW’s M series, and Mercedes Benz’s AMG models. If you notice, that list has one giant thing in common: German engineering, a notion not lost on Mr. de Nysschen. The 112-year-old brand’s refocused mission, he proclaims, is to be the bar set for European luxury brands to meet.

The ATS-V is the high-performance version of the ATS Coupe, combining the highly-gawked sex appeal of the original with some serious right-from-the-factory track power. The ATS-V features a (first-ever for the V-series) twin-turbocharged 3.6 V6 that produces 455 hp and 445 lb-ft, and can get you from standstill to 60 in 3.9 seconds. Not too shabby, putting it modestly, for a luxury brand that had fallen into a “Grandpa’s car” reputation at one point in its history. With a top speed of 189 mph, a Grandpa’s car this isn’t. 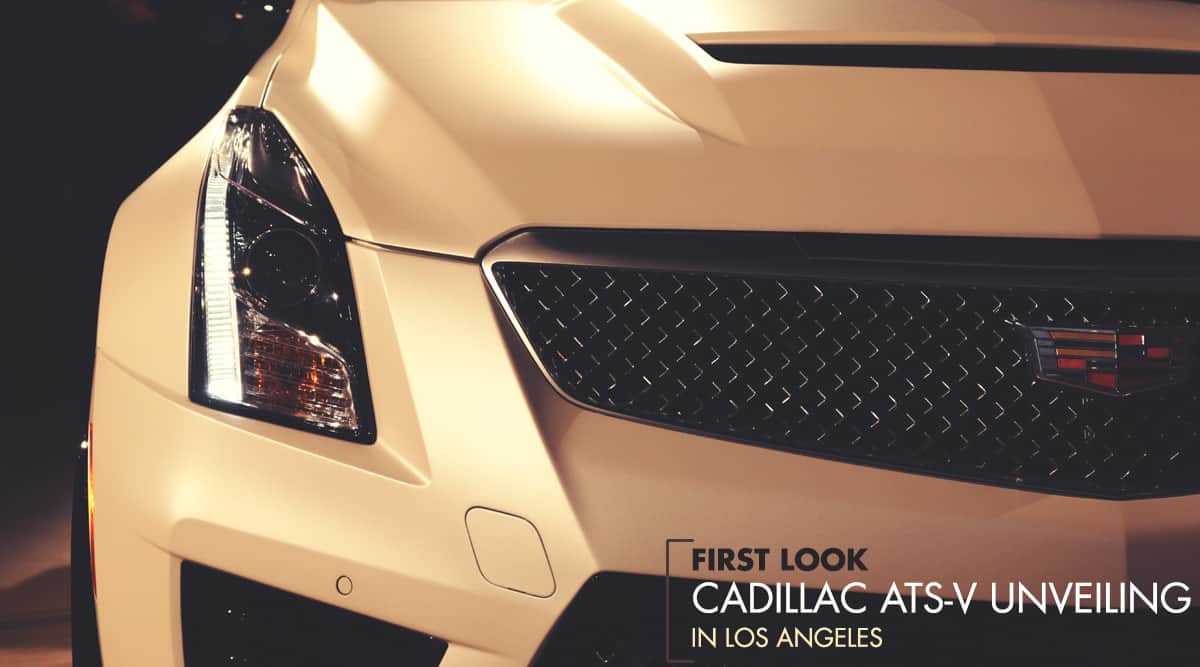 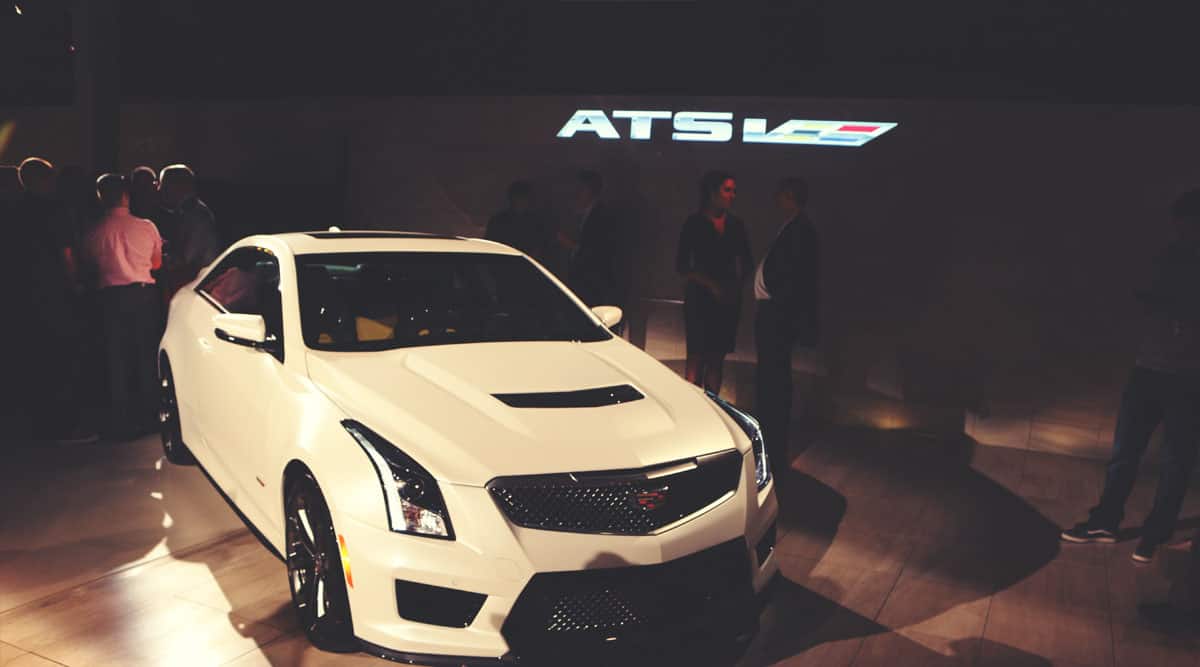 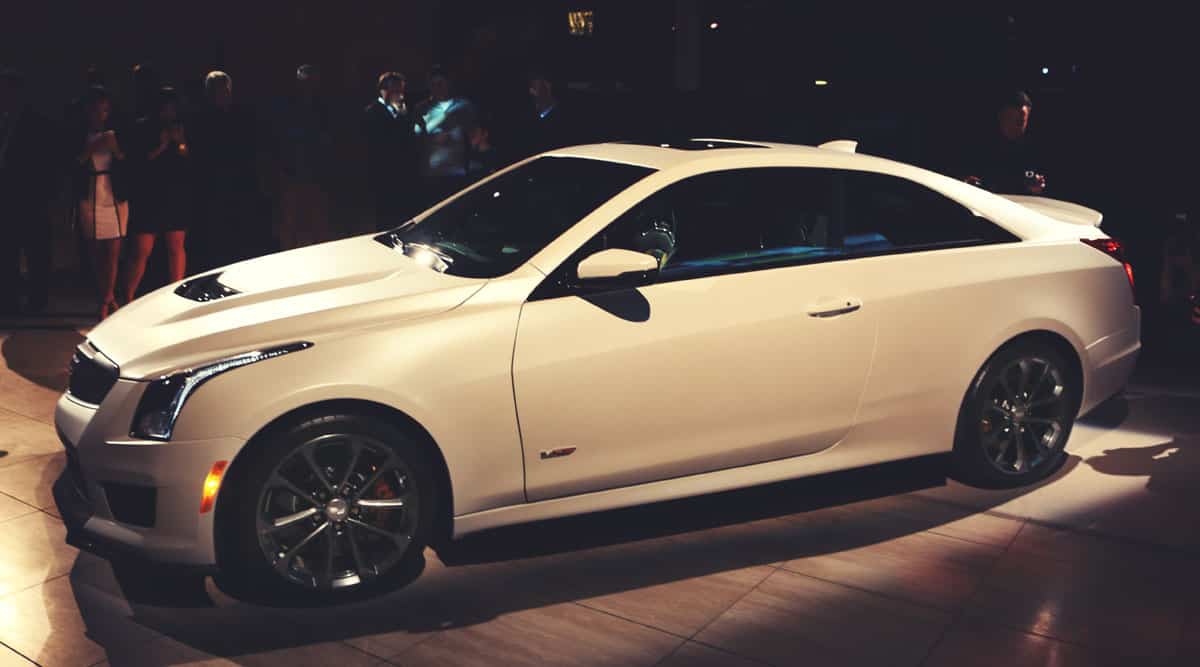 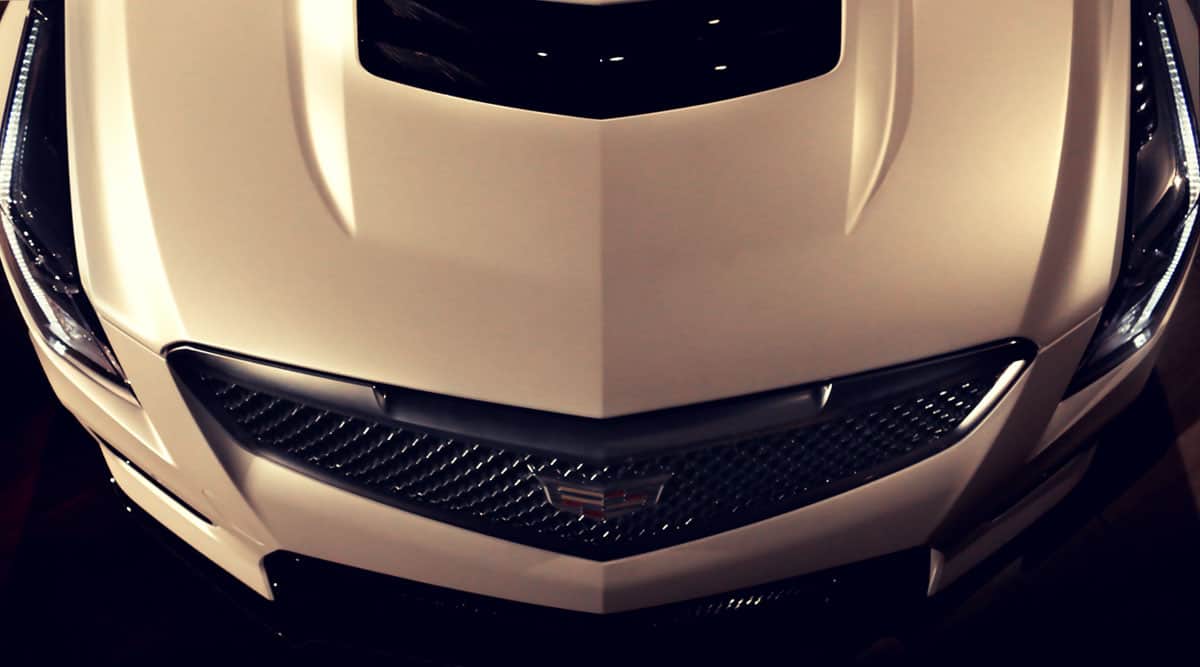 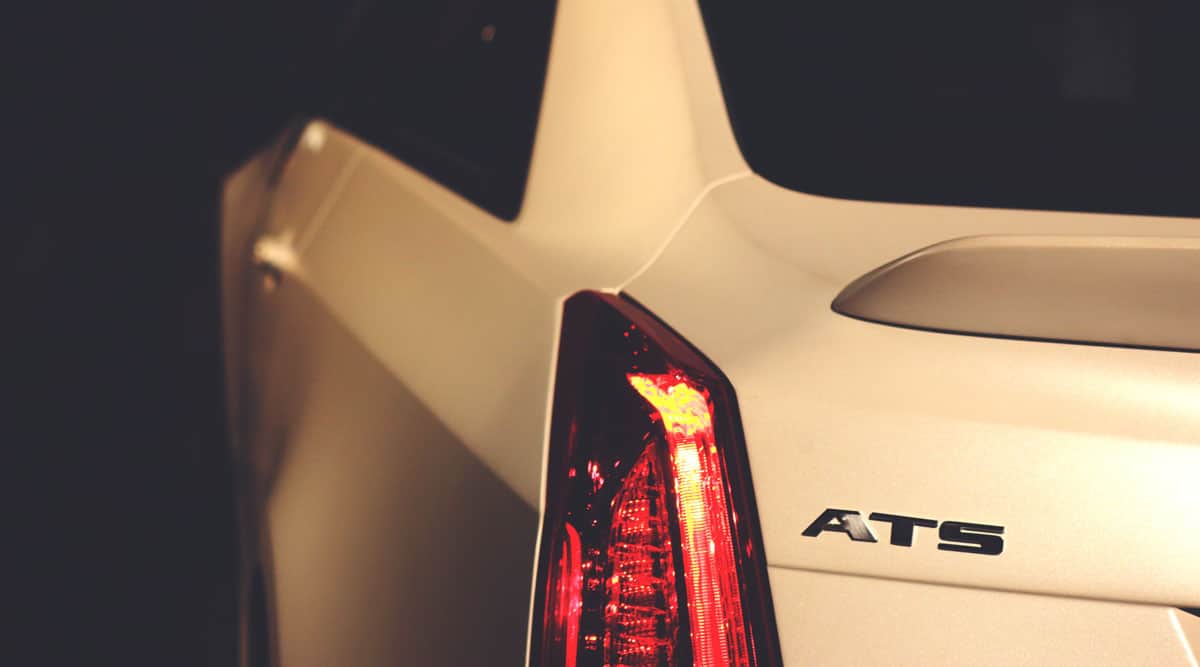 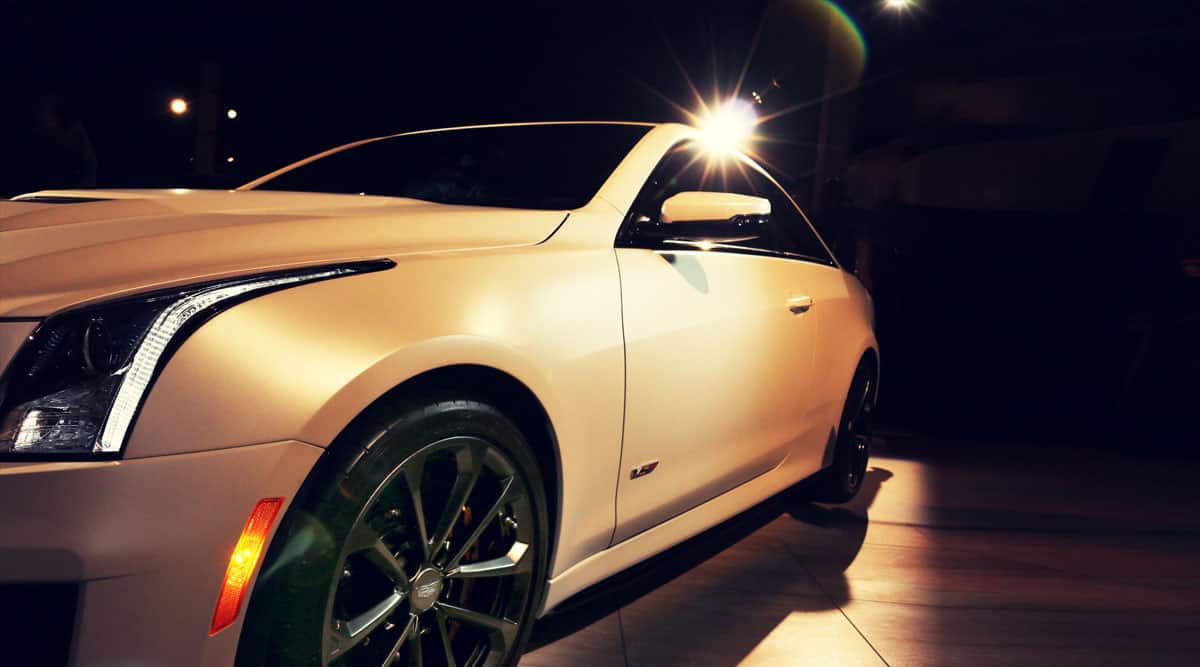 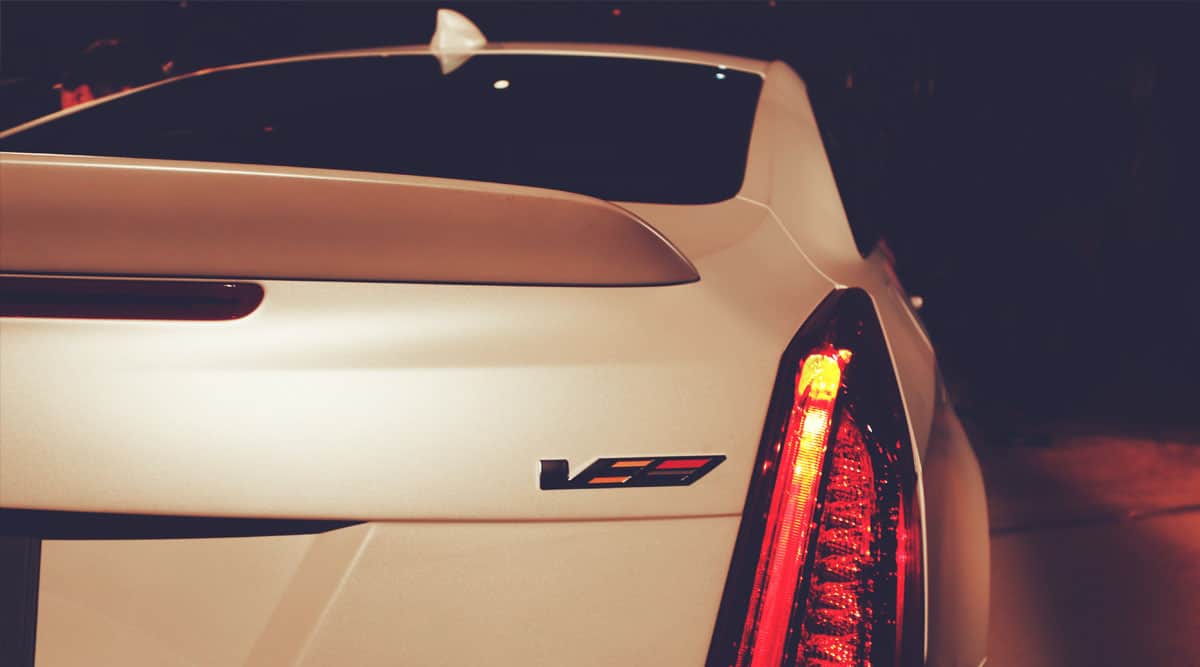 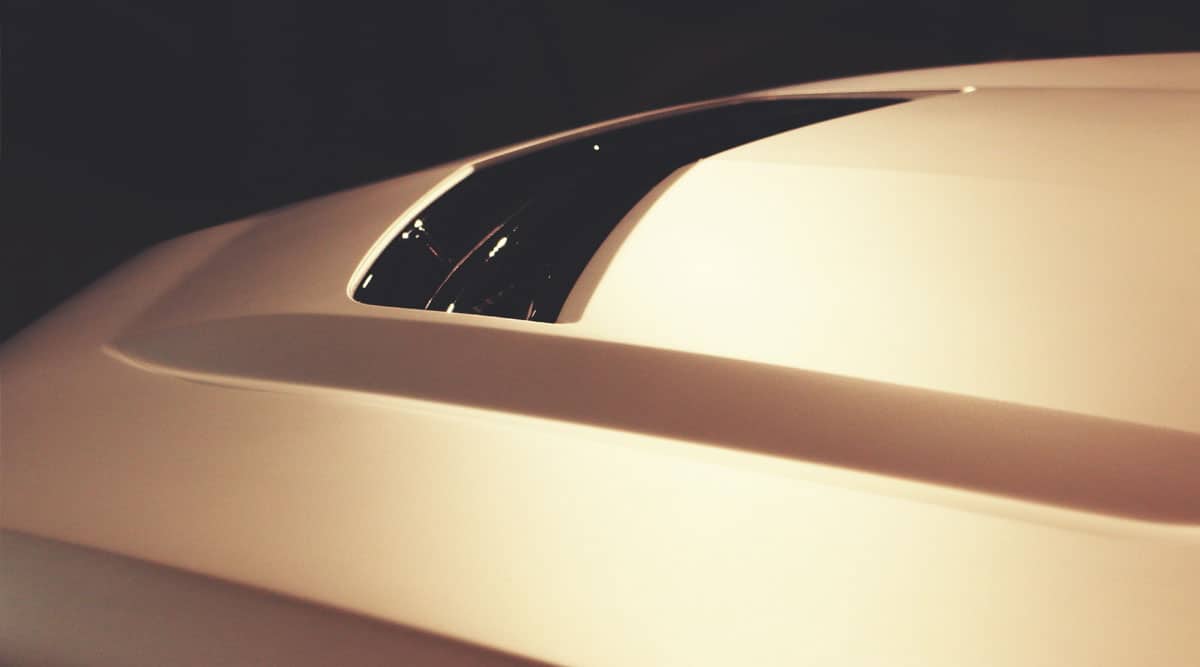 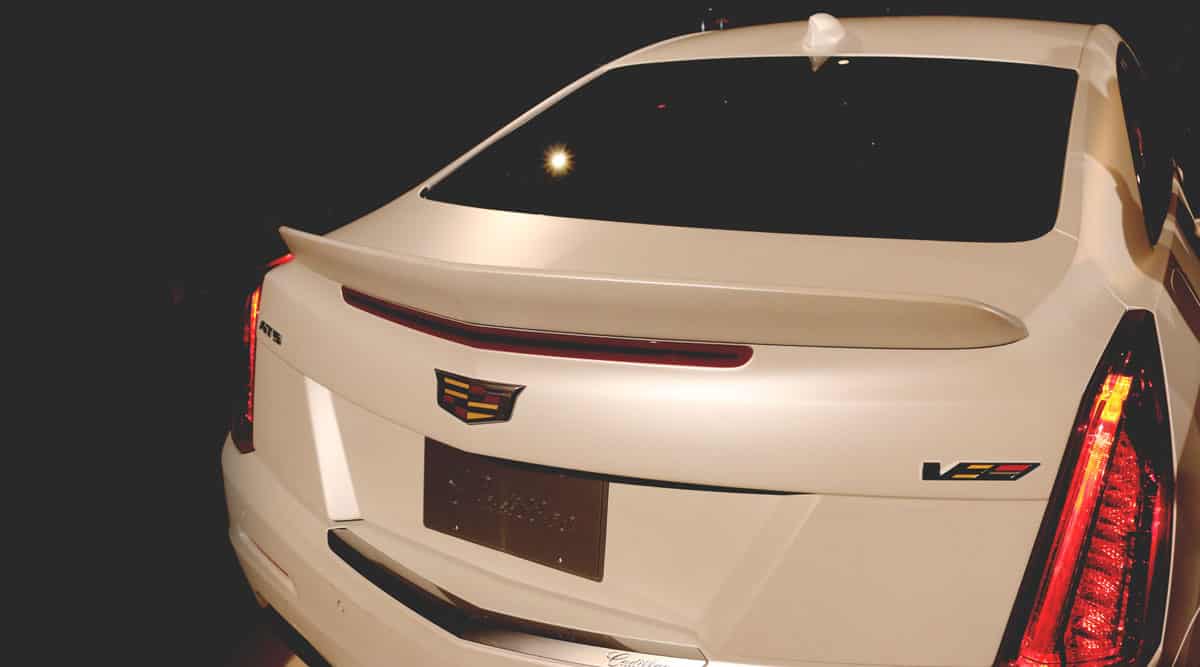 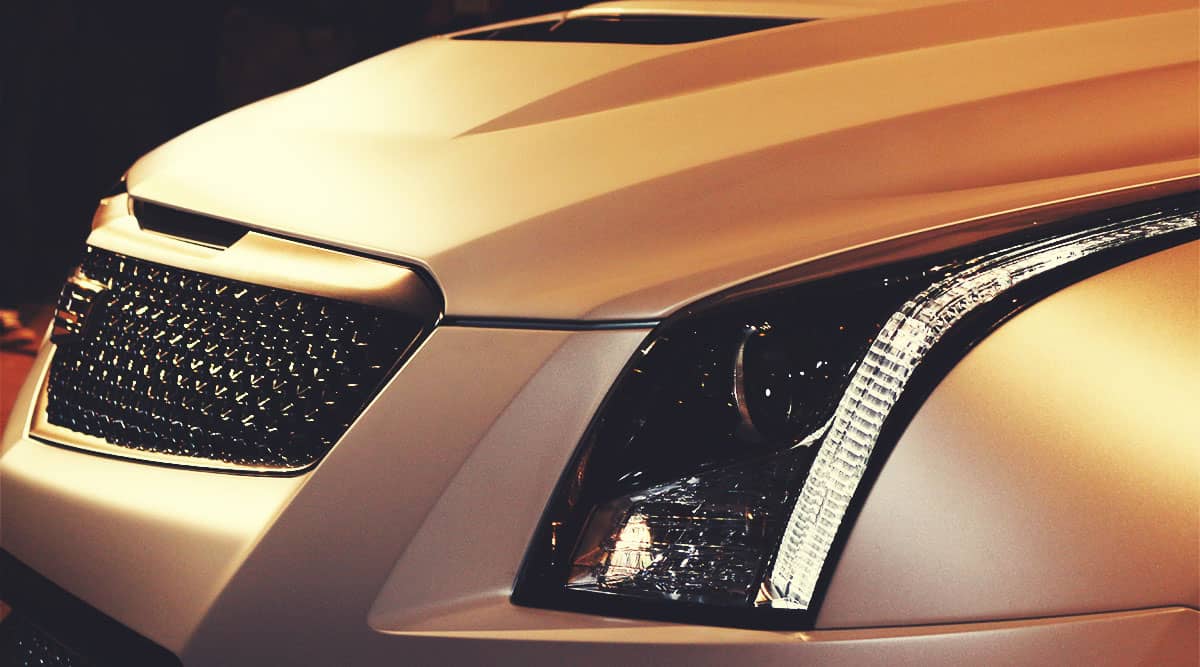 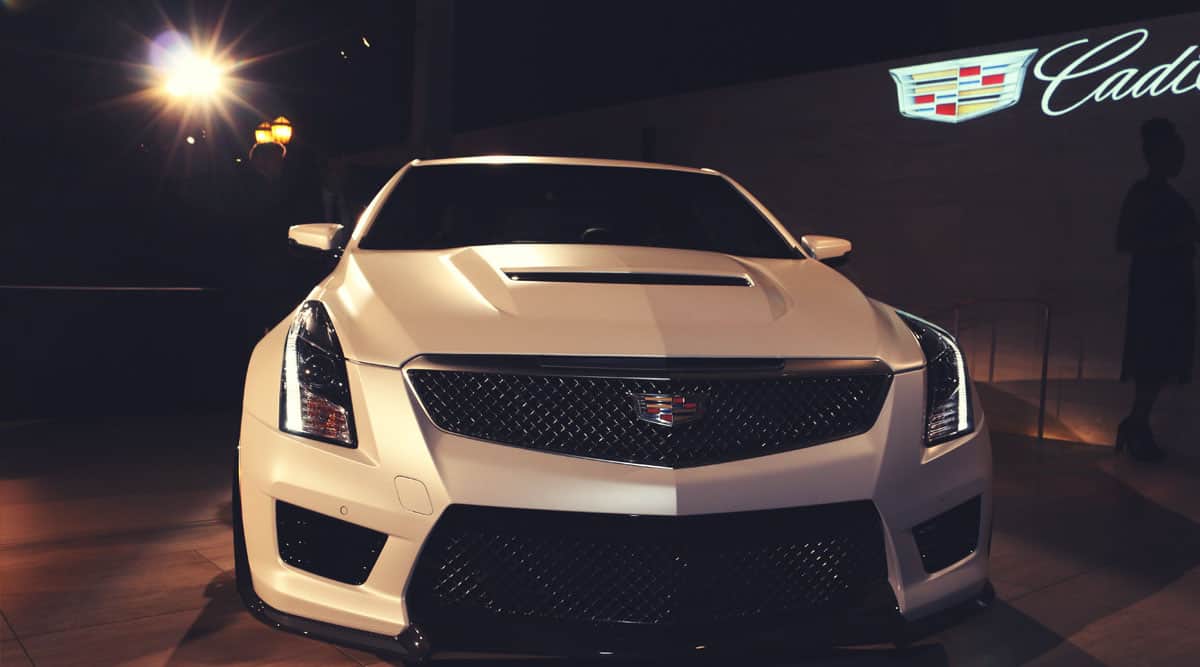 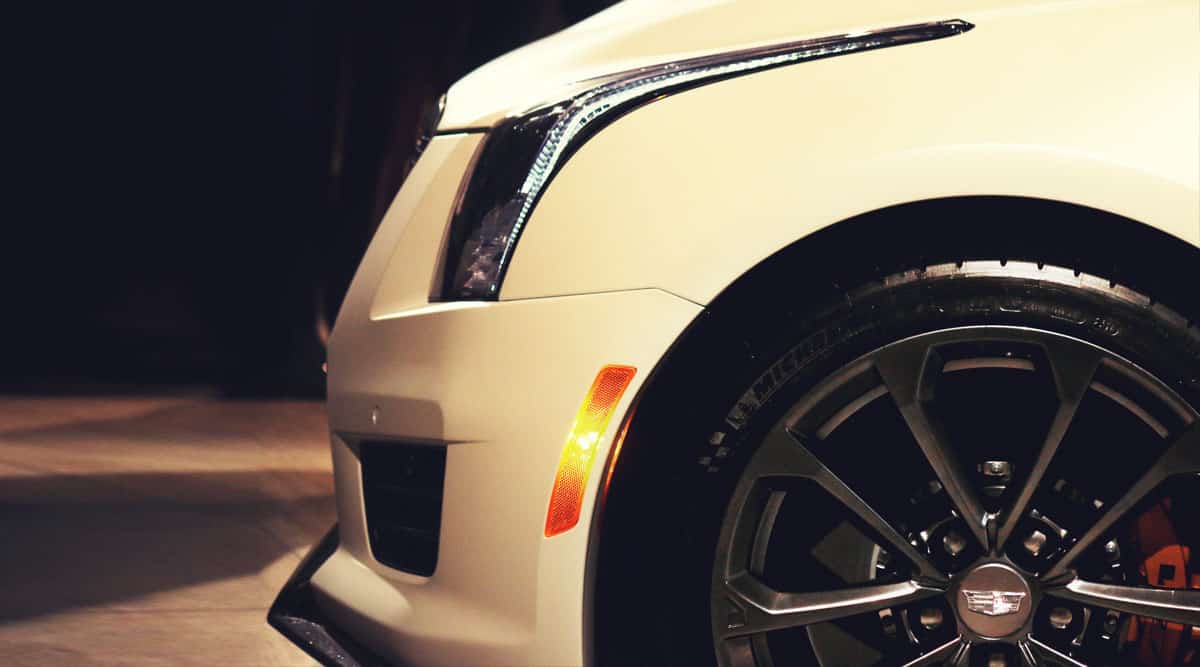 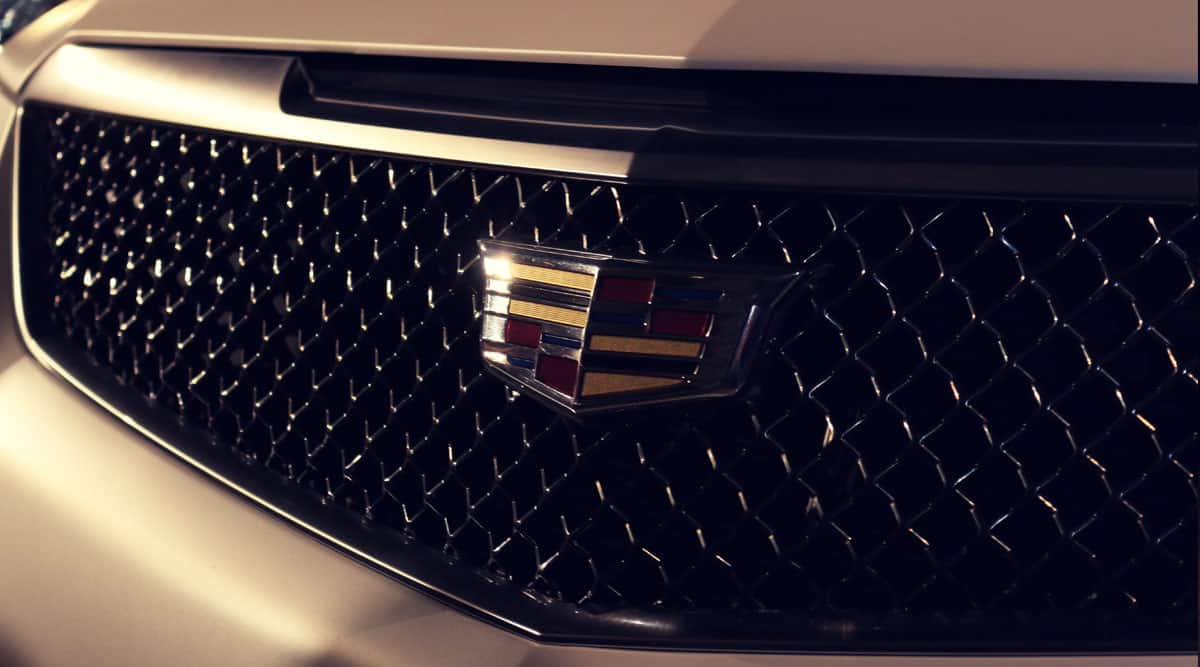 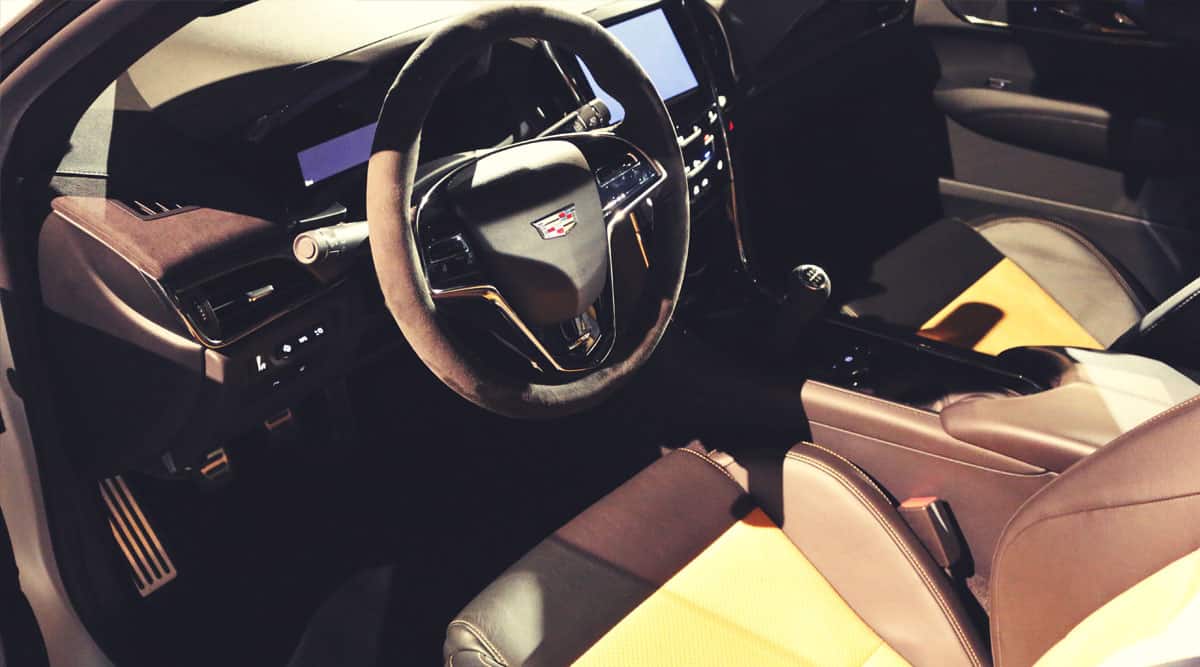 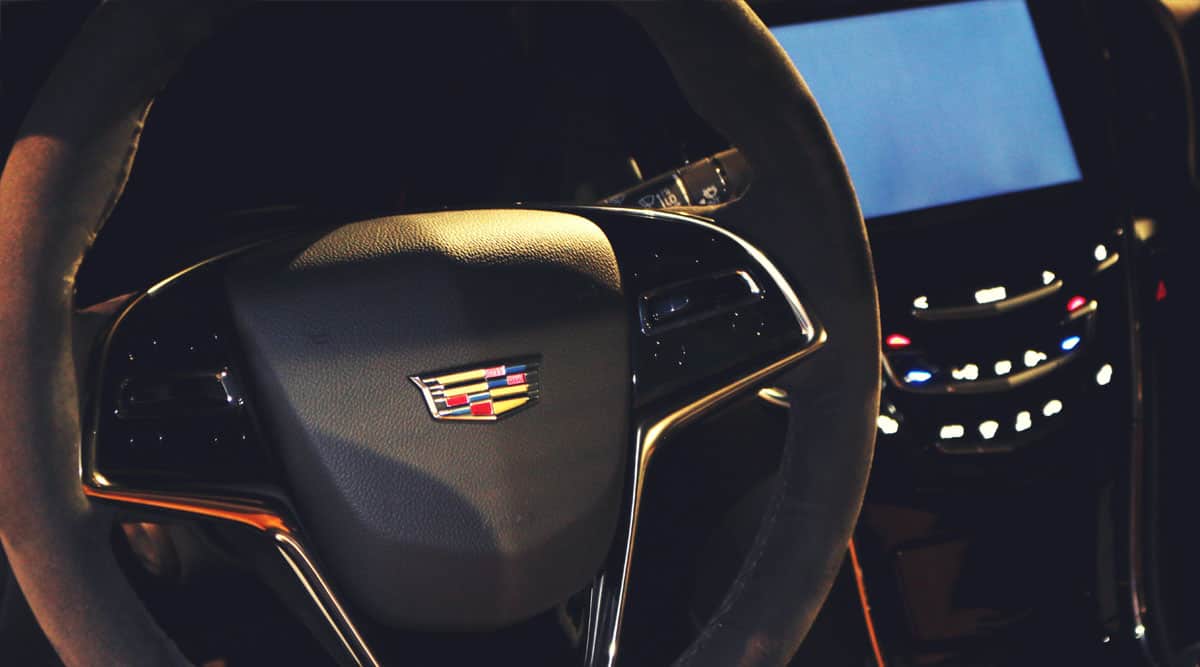 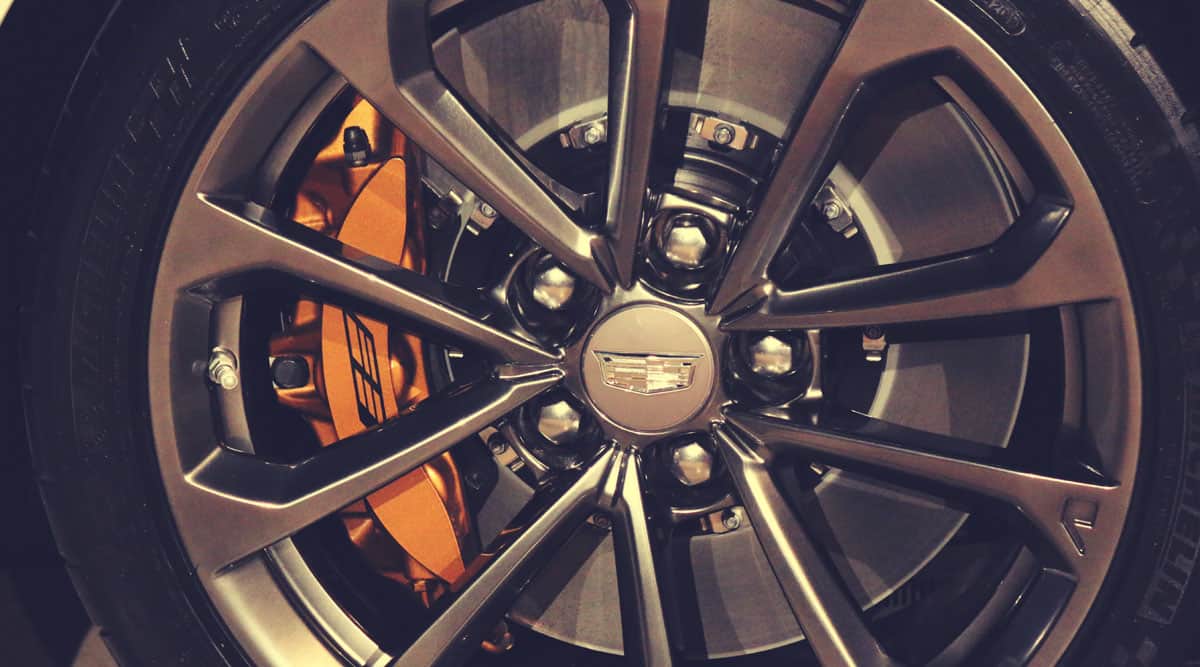 The ATS-V is built on GM’s rear-drive Alpha platform, a stretched version of the one the CTS is grounded on. Expected to arrive at dealers by summer 2015, this luxury-class street vehicle is also a no-excuses track performer. “In fact, the car is ready for the track right off the showroom floor, with no special modifications required,” explains chief engineer Tony Roma. But there is something that grabs your attention even more than its specs: its styling. Offered as a coupe or a sedan, the ATS-V aggressively sports a ducktail spoiler, a front splitter, a ventilated carbon fiber hood, and quad exhaust outlets. The lightweight hood features an air-extracting vent that not only pulls hot air out of the engine compartment, but also helps reduce lift at high speeds by pushing air pulled through the radiator out over the top of the car, instead of allowing it to leak under the car.

Some have been surprised by the single-offer 18-inch wheel diameter, but Cadillac asserts this was intentional: It allowed GM’s engineers to concentrate on a single wheel-tire combination so they could ensure ride quality, handling, and wheel control. All for the explicit purpose of creating a luxurious daily driver that's also a high- performance track car.

Cadillac had no performance anxiety about playing on the competition’s home turf. The ATS-V was put to the test on the famous Nurburgring track in Germany. The new V comes in two rear-wheel transmission configurations: a six-speed manual with rev matching or the eight-speed automatic that’s also in the 2015 Corvette Stingray.

Pricing hasn’t been made available yet, but several sources predict a $60k starting point.

Cars
Discipline is a skill anyone can learn.
Cutting through the confusion: A breakdown of common knife terminology.
You don't have to be a traumatized father fighting a fungi-based zombie apocalypse to wear this jacket.
Did You Miss These?
The funny thing about confidence is that it's only a feeling -- meaning people only know that you're not feeling confident if you SHOW them you're not feeling confident. Take control of these three ... [more]
When a billionaire offers advice about work ethic, luck, and standing out from the crowd, we're all ears.
Carolina or St. Louis? Brisket or Pork shoulder? This summer, navigate the maze of sauce styles, meat cuts, and cooking methods of barbecue.
We've researched the best men's winter coats, based on material composition, product rating, and price.
Life can be overwhelming - Here's a proven method used by fighter pilots to make smart decisions fast and stay on top of it all.
And how to build them in under 30 days.
Do these now to keep your style strong and simple.
If you want to know how some rich actor gets in amazing shape, you're in the wrong place.
A look back as we gear up to move forward.